Having survived the Luftwaffe onslaught during the Battle of Britain, the RAF had replenished their fighter numbers, which included the latest versions of the Supermarine Spitfire, to a point where they began mounting offensive sweeps over Northern Europe. As these became more successful, the arrival of a new German fighter caused serious concern amongst RAF commanders, as increasing numbers of their fighters were falling to the guns of this fearsome new opponent. If the Messerschmitt Bf 109 was considered a thoroughbred fighter, the new Focke Wulf Fw190 was much more of a workhorse aircraft, likened by some pilots as being ‘industrial’ in its construction and operation.

It was a fast, manoeuvrable and heavily armed fighter, designed from the outset to be rugged in the field and relatively easy to fly and at lower altitudes, it proved to be almost invincible in the hands of a capable pilot. The Focke Wulf quickly earned a fearsome reputation for its ruthless effectiveness in combat and was given the nickname ‘Wurger’, which translates to Shrike, or Butcher Bird, a carnivorous bird with something of a murderous reputation. The Focke Wulf Fw190 would go on to see extensive service throughout the remainder of WWII, with over 20,000 aircraft being produced during this time – it is without doubt one of the greatest fighter aircraft to ever take to the skies. 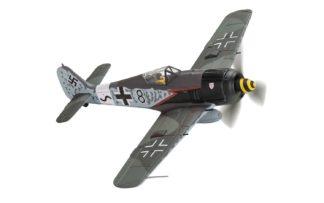