Duncan Grinnell-Milne was seconded to the Royal Flying Corps in 1915 and following his flying training, he joined No.16 Squadron in France, scoring his first aerial victory flying a BE2.  In late 1915, he was shot down and crash landed behind enemy lines.  Captured by German forces, he was forced to spend more than two years in a German prisoner of war camp, before eventually escaping and making his way back to France. Returning to flying duty as the Commanding Officer of No.56 Squadron RFC, Grinnell-Milne managed to score five more victories in the last weeks of the war. His unique SE5a (C1149/W) had a non-standard fuselage colour and carried the name ‘Schweinhund’, which was a reference to how the German guards would address him and his fellow POWs.

At a time when the German Air Services were enjoying a period of air superiority over the Western front, the arrival of the British Royal Aircraft Factory SE5a fighter proved to be a significant development.  At last, the RFC had an aircraft which was capable of taking on and beating the best German fighters and Allied airmen again began to claim a significant number of victories over their adversaries.  In conjunction with the excellent Sopwith Camel, the SE5a was significant in regaining Allied air superiority over the trenches of the Western Front and crucially, ensured that they retained control for the rest of the war. The SE5a was undoubtedly one of the finest fighter aircraft of the Great Air War. 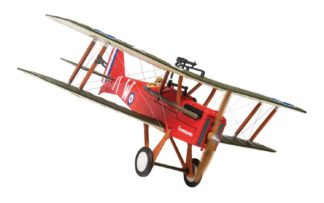