Battle of Britain Memorial Flight, Coningsby, Lincs P7350 is the oldest airworthy Spitfire in the world. Believed to be the 14th aircraft built at Castle Bromwich, it entered service in August 1940, and flew in the Battle of Britain with 266 Sqn and 603 AuxAF Sqn. P7350 subsequently served with 616 and 64 Sqns but in 1942 was relegated to support duties and survived the war. In 1948 it was sold for scrap but fortunately the historical significance of the aircraft was recognised and it was presented to the RAF museum at Colerne. Restored to flying condition in 1968 for the film ‘The Battle of Britain’, it was presented to the BBMF after filming was completed. P7350 currently appears in the colours of Spitfire Ia, K9998 of 92 Sqn, the aircraft in which Flt Lt Geoffrey Wellum DFC shot down his first Heinkel 111. 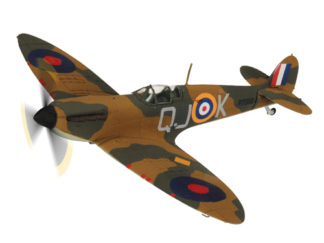