Burrell Showman’s road locomotive no 3910, ‘Wait and See’, left the manufacturing plant at Thetford on 27th July 1921 and was bought on hire purchase by first owners Joseph Crowther and Herbert Johnson. However after less than two years the engine was returned to Thetford and subsequently sold to Pat Collins, the price paid was 1100, a good deal less than the brand new price of 2500. It has now been owned by its present owner Bill Hunt for over 50 years. The engine is unique in that it was finished in yellow with cream wheels, the only Burrell showmans to be finished in this livery and one of only three engines not finished in the standard shade of red, the other two being 3526 Lightning II and 4000 Ex-Mayor, both previously modeled by Corgi. The engine worked for some time in the original yellow paint but later was painted in the more traditional red. In 1946 a new firebox was fitted but less than a year later the engine was taken out of use and lay in Pat Collins yard in Bloxwich until 1955 when it was purchased by Bill Hunt when Collins started to sell off and scrap his remaining engines. The engine remained untouched until 2003 when it was moved to Dingles Museum, where a team led by Clive Gibbard restored the road locomotive. Work was completed in 2009 and she can now be seen in her original glory. 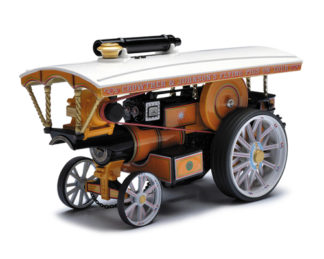